My Life from the Past

Many of you don’t know me.  And those that do – know I’ve made a complete transformation. It’s been nearly four decades ago; the old me . . .

There was this period (a very long one) when that ugly thing lived inside me. It was this thing that controlled my every action and thought process.  Back then, I thought I’d never lived to speak about it.  Well, I’ve survived the journey, and I’ve revealed pieces of it inside this storybook – the good, the bad, and the ugly.  After you’ve read it, don’t prejudge me.  Just know we all have a past. And it’s what we do with it (i.e., the past) that beautifies who we are today!

5.0 out of 5 stars A Transformative Book

Not a Blueprint; It’s the Shoeprints That Matter: A Journey Through Toxic Relationships

This book has the capacity to impact positively on its readers. This is because it addresses everyday problems, like teenage pregnancy, cancer, divorce, domestic violence, sexual promiscuity, breakdown of family bonds and faith – especially in times of crisis. In other words, the book deals with life and its challenges. My rating of the book is, therefore, taking cognizant of the ability of the book to transform lives. I highly recommend it to all who are going through a rough patch in their lives, like the loss of a beloved. 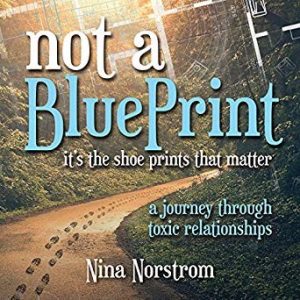 For your reading pleasure, here are excerpts from one of the chapters . . .

. . . When it came to affection, I no longer received any of his gentle, cozy hugs or
passionate kisses. He wasn’t showing sexual interest, either. There was silence
in our bedroom; he slept on his side and me on mine. He had no problem
falling asleep, while I’d lay awake wondering how we’d gone awry. Early on,
we’d pressed our naked bodies together just to feel the warmth. With my
head resting on his chest, we cuddled with his legs interlocked with mine. His
watery kisses soothed me to sleep.
He suddenly changed his Fruit of the Loom briefs to new sexy bottoms—
and he wasn’t wearing them for me. He hung out later than usual. We had
little communication, but he’d seem to be in a good mood. When he was
home, he’d shut himself in his den and talked on the phone as the music
played in the background. We’d stopped having meals together; he’d eat at
one time and China and me at another. It was so hurtful, sad, and lonely.
No doubt, there had to have been some infidelity. The voice at the end
of the phantom phone calls only spoke when Mike answered. This was a
sure sign of him having another woman. I’d trusted and believed in those
promises he’d made, but I felt the wrath of his betrayal and abandonment.

I never got the full details about where China had discovered the diary.
It was either under the bar in the basement or in his office den. Anyhow,
wherever it was found, it was a blessing! Once I looked, it showed that Mike
zeroed in on my every move. It was frightening to learn my every move was
being scrutinized. To see the diary full of entries chilled me to the bone. The
notes Mike made showed my leaving date and time, where I’d gone, with
whom (if anybody), and the time I’d returned.
10 a.m. / Sat, 4-14-1984 / She went to the mall / Gone with Peaches / 8:15
p.m. brought back two bags
7 a.m. / Mon, 4-16-1984 / Left for work / Carpooling / 7 p.m. arrived home
late – why?

It was a scary feeling knowing my moves were being tracked. The time
had come to rescue us from this monster. As much as I wanted China to have
a dad, we weren’t going to stay trapped in a toxic marriage. Although our
little family would cease to exist, I needed some peace of mind.
Not only was I cursed with Dad’s traits, but Mom’s as well. Mom couldn’t
pick out a good man, and neither could I. I never failed at picking the wrong
guy to love. While looking for Mr. Right, all I found was Mr. Wrong. . .

A Salute to an Extraordinary Person
September 11, 2020