Journeys can be an amazing thing; especially, when making it through and looking back! 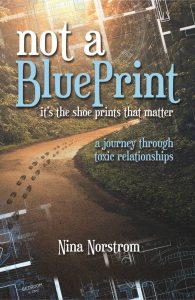 (Note: a portion of proceeds goes for funding against toxic relationships.)

What is this book about?

Weaves lies with love, betrayal with deception, and drama with murder.

Ultimately, it teaches lessons on the meaning of relationships ─ beautifying honesty and compassion.

It’s an inspirational story with ingredients on caregiving, overcoming adversity, learning lessons, letting go of toxicity, and defining relationship roles in our lives.  Whether toxic or nontoxic, these relationships are an integral component of daily living.

Not a Blueprint is a real-life journey about one family’s experience.  The tale exposes a mother’s struggle to escape a world of toxicity, a battle entangled in the clutches of diseased relationships, and the shoe prints its experiences left on their life.  This story in its openness and raw form projects a remarkable voice to love.  Spreads its message about a heroic fight; a mother’s discovery ─ finding life after darkness; the power of courage; determination; and bravery while striking back to wipe out toxic relationships. The Insights reveal that life brings many challenges and provides lessons along the way.

Review added to the book page on Amazon by Melissa Dillow

Full text: “Masterfully told in compelling language Not a Blueprint: It’s the Shoe Prints that Matter:

A Journey through Toxic Relationships” by Nina Norstrom reads like a Lifetime® movie.  Drama, suspense, romance, comedy, this book has it all.  But this is no made up tale; it is real life– the good, the bad, the ugly, and the beautiful.  Through the pages of “Not a Blueprint: It’s the Shoe prints that Matter,” Norstrom takes us on her personal journey from relationship to toxic relationship and back to a place of health. . . .”

Dad’s relationship with Mom became more obsessive and abusive.  His crazed behavior  made our family dysfunctional.  Dad might have been a decent provider for us, but he was not a good husband.  A lot of times, he was full of evil; some say he was as evil as the devil.

Many times, the thoughts in my mind echoed:  How can a person keep doing the things he does and still go to church on Sundays?

It meant nothing to Dad when he hit Mom with his belt. “You have real issues and ya need to address them,” Mom would say in her soft, passive voice.

. . . There was a very slick, sick, deep dark side to him.  Keeping his demons suppressed inside had to be torture.  In Dad’s family, there was a pack of hidden skeletons stored away in the closet.

As soon as Craig saw the anger upon my face—my scrunched up eyelids,  gritted teeth, clenched jaw, and a horrible frown—there was nothing but  silence.  When it broke, I began to find out more about the man I was with . . .

Stepping back to reflect on a moment of epiphany.

Yes, I was young, vulnerable, and extremely naïve to have indulged in such an illicit affair. And if there’s blame to be shouldered, it’s shared between the two of us—me for being vulnerable and naïve, and him for his dishonesty and those broken vows. Most importantly, he was older and should have known better. We’d committed a sinful act, not only against ourselves, but against another as well.

Often, a person releases one guilt only to harbor another. Ending our relationship would have been the righteous and healthiest thing to have done, since marriage vows mustn’t be taken lightly. This was truly a lesson I’ve learned.

. . . “You better—you better not even go there,” I said.  As we elbowed our way in, he quickly grabbed the phone and called the police.

Dana snatched the phone, ripped it off the wall, lowered her hammer, and said, “I’m about to take this hammer and smash all your homemade furniture.” You see, my sister didn’t care too much for him anyway, and she wasn’t one you wanted to mess with.  She’d come in with a weapon and was prepared to take care of business at any cost.  Moments later, they were tussling back and forth.  Mike dashed through the door with blood dripping from his body.

“Help me!  Someone please help me, call the police!” he shouted, as he ran down the street banging on the neighbors’ doors.

Dana yelled out, “Go get the other hammer from the car. Hurry! Hurry!”

INSPIRATIONAL:  Through a journey of love and loss, author Nina Norstrom goes through her life lessons, showing how to deal with the challenges thrown in our path.  Everything has the potential to develop into a toxic relationship, not just our relationships with people.  They can be formed with food, emotions, substances, and diseases.  With all of her experiences, she has come to find that letting go of toxic relationships is not impossible, and doing so just might change one’s life for the better.

“Congratulations on the Crowned Heart of Excellence review your book received with InD’tale Magazine.

What a fantastic accomplishment!  It takes a lot of hard work and perseverance to write a story of such caliber and you deserve this distinction.  Enjoy it!”

Mirror, Mirror, on the Wall

This guide is an essential bridge-building tool.  It opens the gateway to finding self-love and bringing to light the ugliness in toxic relationships.  The information and activities introduced beautify an array of materials that are insightful, educational, enlightening, fulfilling, enriching, refreshing, and rewarding.  Think of it as a detailed script created to teach readers how to redefine their SELF-DISCOVERIES.

Review added to the book page on NetGalley:

Full Text: “The formula for self-esteem equates to successes measured by failures.”  Self-love is a difficult thing to obtain by yourself.  This book is a great start to getting rid of the negatives and gaining positives about yourself.  As you read the chapters, there are spaces you can write in what self-love means to you. Once you start this book, you will be on an amazing journey to learning how to start “Living Healthy, Thinking Healthy, Being Healthy.” 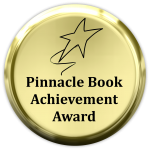 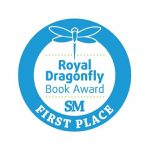 Category: E-Book Award in the Category of Activity Book – Adult

What Ya Got for Me?

Welcome! Life throws many curves into one’s pathway.  How one handles those curves creates the beauty of the journey. This guide is meant for everyone.  Anyone eager to satisfy their hunger and thirst to find self-love and remove toxic relationships will benefit from its use.

The guide has a dual purpose: developing self-love and creating awareness of toxic relationships.  To direct you toward those purposes, the guide is equipped with information and activities that require daily thought and participation.  You’ll discover there is a lot to absorb and focus on.  Consider taking frequent breaks to get recharged and energized for the coming of a new you!  All chapters contain information as well as activities that help you apply what you’ve learned.  Don’t dismiss or shy away from the information sections.  Knowledge is power, especially when that knowledge gives you the freedom to engage and empower yourself.  This guide’s information is part of a discovery for finding self-love and exposing the ugliness of toxicity.  Embrace it, remember it, and practice it!  Internalizing the information and participating in the activities outlined will maximize your success . . .

Toxic Defined in the Raw
Identifying the Faces

. . . Toxicity in the context of a bigger stage, like today’s society, is readily apparent.  The negative entity that creeps inside our circle is usually masked in a variety of shapes, sizes, and disguises—all creating conflict and damage.  When the conflict erupts, we see the unhealthiness clearly.  These unhealthy interactions become readily visible when our soldiers are on the battlefield fighting a war, when fathers fight against their sons, when mothers turn against their daughters, in the abandonment of and cruelty to our animals, in our emotions soaring against our feelings, in the abuse of alcohol and drugs, in the ugliness of illnesses and diseases—the list goes on.  These unhealthy interactions become the norm and begin to make up our own relationships. . . .

This section has a great deal to offer for adolescents (ages 13 to 17) and young adults (ages 18 to 25).  We become young adults before maturing to a full-fledged adult. Don’t think young adults are not experiencing abuse—they are!  Violence in the dating lifestyle of our young adults is a huge problem.  They experience the same level of abuse as adults. Unhealthy relationships occur when one partner exercises control over the other.

How would you define dating violence? . . .

Healthy Is the New Me

Mirror, Mirror, Is that Me?

Look in a mirror and focus on yourself very closely.  Look deep, deep, and deeper into the glass.  Don’t miss seeing a wrinkle, a mole, a pimple, a freckle, a hair, an eyelid, an earlobe, an expression, or an emotion that pops out at you.  Be prepared to draw the image that appears.  Hopefully, this is the person you’ve become.  The brightness that shines through you will glimmer and reflect your change.  You’ve spent a lot of time and energy acknowledging self, recapturing your life, who you are, and who you are becoming.  There is so much that lives inside the inner you . . .

“Not a Blueprint . . .” is available for group readings and book clubbers. There are plenty of questions to make for intriguing discussions.

What is a VDO Book?

A platform from the makeup of novels, short stories, screen, and stage plays; scenes that are interacted by live actors and actresses.  This unique concept allows viewers to see the words come to life, and gives its audience a more vivid impression of the story . . . while portraying its characters.

The storybook “Not a Blueprint” showcased as a VDO Book Trailer, in a launch.

The flyer depicts a scene or two and while watching  . . .

Realize, those scenes won’t define who I am today.  Only, that I’ve been somewhere!

Your online review is valuable and helps to strengthen its literary work in the future.  After reading, click on any of the above book icons and share with us your feedback.  Readers would love to hear from you!

A portion of the proceeds from my literary creations will go to help fund its fight against toxic relationships.